Great riders are always pushing their limits. And great superbikes should do the same. That means your bike has to offer more than just a big engine—it also has to have great handling and superior power management. That’s exactly what our 2019 CBR1000RR and CBR1000RR SP deliver. New this year: an even more advanced Honda Selectable Torque Control (HSTC) complete with our new, multi-level selectable wheelie control. Now discerning riders can connect with their bike and the track like never before.

The CBR1000RR is light, powerful and undeniably fast, making it a beast on the street and in the canyons. If the track is more your specialty, then you’ll want the CBR1000RR SP. World championships have been won on bikes that the SP would leave in its dust. We invite you to check them both out. And decide just how far you want to push your limits.

The following features regard CBR1000RR 2019

Notes to the above specifications

Data obtained by Honda under the standard test conditions prescribed by the WMTC methodology. Results may vary depending on driving style, vehicle maintenance status, weather and road conditions, tyre pressure and load. Tests were conducted using a basic version of the vehicle, with the driver on board only and without additional optional accessories.

All specifications are provisional and subject to change without notice.

Honda Selectable Torque Control
With Honda Selectable Torque Control (HSTC), we’ve got your back, but you’re in control. Here’s how it works: The system automatically adjusts engine power and grip to optimize torque at the rear wheel, reducing rear-wheel slip. You get your choice of five power curves, ten torque-control levels, three engine-braking levels, and now three selectable levels of wheelie control so it’s easier than ever to dial your bike in at the track.
Throttle by Wire
The CBR1000RR’s throttle-by-wire system works in concert with our Honda Selectable Torque Control. With the two, you get your choice of three engine power-delivery modes, plus two which you can custom program yourself.
Hi-Performance Four-Cylinder Engine
Featuring high-compression 13:1 pistons, the CBR1000RR revs like only a flat-plane inline-four can. It also makes ten horsepower more than our previous generation of CBR10000RR.
Brembo Monobloc Front Calipers
The CBR1000RR SP’s race-proven, radial-mount Brembo monobloc calipers are light, but they provide exceptional stiffness and excellent braking performance.
Honda Electronic Steering Damper (HESD)
Most steering dampers only sense handlebar-deflection speed. The Honda Electronic Steering Damper (HESD) is way more sophisticated. It also detects vehicle speed, and adjusts damping proportionally. That helps maintain low-speed maneuverability while providing excellent, predictable high-speed handling.
Dual-Stage Fuel Injection
The CBR1000RRs feature two sets of injectors per cylinder for both low- and high-rpm performance, instantaneous high-rpm response and great low-rpm metering and clean running. Refined EFI settings make the engine even more manageable, with smoother throttle response specifically at smaller throttle openings.

Öhlins Smart EC Suspension
The CBR1000RR SP features an Öhlins Smart electronic control suspension system. It comes with three pre-set suspension modes, plus two “blank” user-programmable modes. It’s fully adjustable, semi-active, truly premium and track-ready — a huge upgrade from what you’d normally find on a streetbike.
Gyro-Assisted ABS
The CBR1000RR SP comes with anti-lock brakes, and they’re available on the standard CBR1000RR as an option. But these brakes go one better, including rear-wheel lift analysis (think hard stopping here), along with a program that takes lean angle into account.
Slimmer Ergonomics
These CBR1000RRs are much slimmer than previous models in the tank/seat junction area, and also in the upper cowl (more than 24mm trimmer). This improves aerodynamics, and the narrow tank makes it easier to tuck in.
Titanium Fuel Tank
The CBR1000RR SP features a radical, thin-wall titanium fuel tank. Filled to capacity, the tank is almost four and a half pounds lighter than our prior SPs, but still offers plenty of operational range.
Lightweight Sub-Frame
Almost a full pound lighter than our previous generation, the CBR1000RR sub-frame further refines our mass centralization efforts. Light is always right, and these models are the lightest CBR1000RRs we’ve ever produced.

Assisted Slipper Clutch
Superbikes can deliver a great deal of back-torque through the driveline, upsetting handling—not the CBR1000RR models. Its Honda-designed assisted slipper clutch is the same type used on our MotoGP bikes. The design does away with the need for heavy clutch springs, ensuring full power transmission with smooth shifting and a light clutch pull at the lever.
Titanium Muffler
MotoGP bikes use titanium for their mufflers, and so does the CBR1000RR SP. It’s a significant weight savings.
Premium Wheels
You’ll notice that the CBR1000RR SP features five-spoke wheels. They’re light and strong—more than a pound lighter than the previous six-spoke wheels.
Efficient Radiator Design
Almost an inch narrower than on our previous-generation CBR1000RR, and featuring a high-density core. Plus the radiator tucks in tighter and cools just as efficiently.
Full LED Lighting Package
Headlights, tail lights, turn signals—with the CBR1000RRs it’s all done with lightweight, efficient, cool LEDs.
Thin Film Transfer Display
TFT means an instrument display that’s lighter and easier to read than previous LCD designs. It’s a first for Honda, and it’s made its premiere on the CBR1000RRs.
Lithium Ion Battery
The CBR1000RR SP comes standard with a high-tech lithium-ion battery that is just half the weight of the previous lead-acid battery—a huge savings! 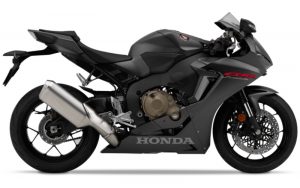 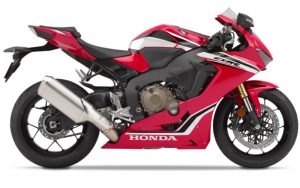 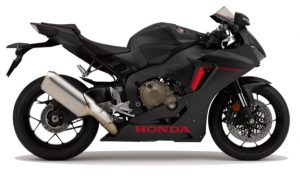 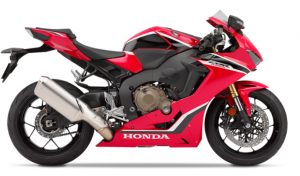